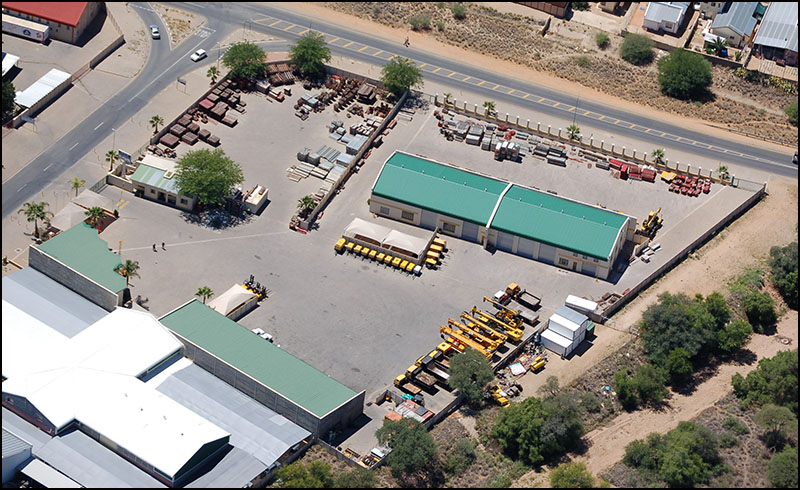 In October 1987 Kris Guttzeit founded the company Windhoek Hire Sales & Services CC.  He started with 2 air compressors, one Nissan Safari pick-up and one general foreman, namely Johannes Oranje, in charge of delivering and maintaining the compressors, as well as small tools like mixers and compactors.

The first big job landed, was hiring out compressors to the Municipality of Windhoek for the demolition of the old hostel in Katutura. A 24/7 operation for three weeks. The money generated was invested into a concrete mixer, a generator set and air-compressors.

September 1996 the ELB Earthmoving and Mining Equipment (PTY) LTD agency in conjunction with Hacker Field Services for the back–up support strengthened the force, selling high quality earthmoving and mining equipment. Hacker had a very well equipped workshop and is fully geared up for field services.

Because of all the new Agencies and especially the expansion in the selling field it was decided to develop the erf in no 5 Nickelstreet in Prosperita, to create a clean and professional environment for the clients and future business to come. Building started in August 1997 and was completed in March 1998. The new setup comprises of a double storey office block, a sales area and a workshop with service and wash-bays, a guardhouse plus a recreational area for the employees.

In September 2001 the company Multi-Tow Namibia CC was added to the range.

In November 2004 Windhoek Hire Sales & Services CC opened its first branch in Swakopmund starting off with small tool hire like compactors, generators, builders hoists, compressors, rammers and Scaffolding. The premises were bought and revamped in March 2008, comprising of offices, a workshop with wash bay and a spare part warehouse, to accommodate our plant hire as well as our new equipment sales.

In April 2005 we acquired the VIPAC Agency for the selling of double drum pedestrian roller and rammers. Both products are manufactured in South Africa guaranteed to last in African conditions.

In September 2007 construction of additional 2 warehouses was completed. One to be used as additional workshop and the other one as future a spares department.

In January 2010 Windhoek Hire Sales & Services CC terminated the agency agreement with ELB and VIPAC and decided to move away from selling equipment.  All energy was put back into plant hire, the core business, of WHSS. The compressor and backhoe loader fleet was replaced by new ones  as well as newer and bigger mobile cranes were acquired.

In March 2014 Form–Scaff (PTY) LTD decided to break away from Windhoek Hire Sales & Services CC. This was quite a big step after 25 years. They decided however, to stay on our premises – still “under one roof”, but driven by new management.

Our advantage is the variety of services and products we have to offer. It is very convenient for anyone to work with WHSS, because everything from mobile cranes, trucks, loaders, tippers, compressors, backhoe-loaders, telehandlers, aerial platforms, multi-tow tip trailers and many more – for hire or for sale – is offered under one roof. Supported by a dedicated, hardworking and honest family.